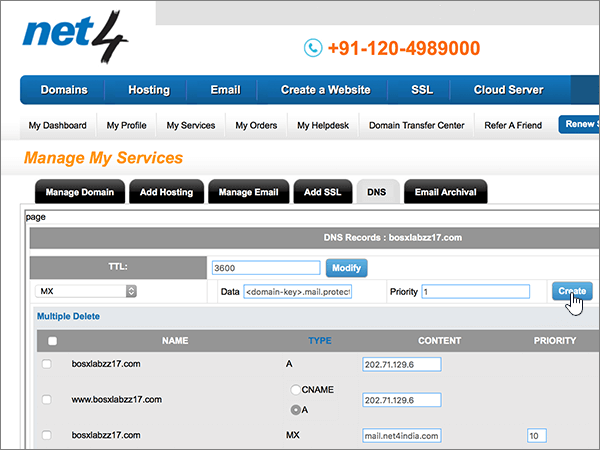 Net4 India Limited was taken to National Company Law Tribunal (NCLT) under Insolvency and Bankruptcy Code 2016 (OBC) by its creditors for non-payment of dues, that mainly included Edelweiss, Banks and others. The Insolvency and Bankruptcy Code 2016 has provisions for resolution/revival of the Company before it go into liquidation process or is declared as Insolvent. That is, the Company can be declared Insolvent only on the order of NCLT, if the resolution process is not successful.

NCLT appointed Mr Vikram Bajaj as a resolution professional in terms of IBC. Resolution Professional further appointed Mr Ankur Raheja, as techno-legal consultant in the matter. The details as to Resolution Process and variuous announcements have been included here at: https://net4cirp.wordpress.com.

In the meanime, the Net4 Customers have faced various issues as to renewal of Domain Names and the same has been bought before the NCLT by the Resolution Professional. But there have been rumours around that Net4 India Limited has been shut down, which is not true. Rather, Net4 committed before NCLT to offer cooperation for resolution of the Complaints. Now in this respect a dedicated email ID has been setup icannresolutions@net4.com. So now all the complaints need to be directed to this ID for early resolution ! In short, the matter is sub judice with NCLT and corona has delayed approval of resolution plan.

While, now the NCLT has passed following order dated 25 Spetember 2020, referring to the main issue behind whole process as referred under Para 3:

Further, Net4 India has been asked to clear dues of ICM Registry, PIR and ICANN. Hopefully, they may have cleared by now.

In the matter of:

1. It is an application filed by the RP seeking urgent orders as well as expedite hearing in other applications. The gist of the grievance is various domain Registrants complaining that they have not been getting services from the corporate debtor, likewise Registries making calls that they would not revive domain registrations and cancel the license of the Corporate Debtor unless dues are paid, since the corporate debtor has remained interface between Registrants and Registries, unless the respondents are immediately directed to clear the dues of the Registries and provide proper services to the Registrants, the Corporate Debtor could not survive and if solution is not provided, many domains providing services to the public at large will come to stand still.

2. At the outset, RP Counsel Ms. Pooja Mahajan has argued that Rl/Promoter-Director Mr. Jasjit Singh Sawhney on 30.07.2020 gave an assurance to this Bench that he would comply with all the grievances and will not let any issue come before this Bench. But subsequent to such assurance, about 200 Registrants complained to the RP that the Corporate Debtor has failed to provide services as agreed in between them.

6. The RP Counsel has also mentioned that this business is not limited to providing services to some private agencies, it is in effect providing services to the public directly, if any delays happened in providing services, it is not about some company losing or gaining, it is directly affecting the daily life of public of India, therefore the RP has filed this application hoping for a solution before hearing on Avoidance Application primarily assailing the transfer of shareholding of the Corporate Debtor to another Promoter Company namely Track Online India Private Limited and also about wholesale transfer of the business of the Corporate Debtor. She says unless that application is decided, real value of the Company will not come out. Net4 India Limited (CD), in the words of the RP, is made a dummy company after its shareholding in Net4 Network is taken out and its business was
transferred to Net4 Network sometime before initiation of CIRP.

7. On elaborately hearing over the application from the Petitioner side, when the same is put to the Promoter-Director counsel Mr. Prashant Merita and Mr. Rakesh Kumar, they categorically stated, as to the issues of the Registrants, the Respondents have been complying all along and they would comply with the pending issues as well and report to this Bench by 01.10.2020.

8. But as to the dues payable to Domain Name Registries such as Public Information Registry, ICM Registry, ICANN, and etc., they will report within five minutes after taking instructions from the Promoter-Director of all these companies namely Net4 India Limited, Net 4 Network, Net 4 India-Domain Registrar Company and Trak Online India Private Limited.

9. Accordingly, we have passed over the matter hoping, this promoter director would realize the urgency involved in the issues and raise to the occasion. In view thereof, this matter was passed over to get instructions from the Promoter-Director with regard to the second issue.

11. But the Promoter Director Counsel has simultaneously made another statement, in case three weeks’ time is given, he would
be in a position to reconcile after verifying the same with the said organisations mentioned above.

12. On hearing the submissions of the Promoter counsel over the second issue, we understand now the burning issue is, the services have not been being properly provided to various registrants. From other side, if dues are not paid, Domain Registries will not revive agreements with the Corporate Debtor.

13. In this tricky situation, if this Promoter-Director takes three weeks, then various registrants providing services to the public including Government Agencies will suffer immensely.

14. In view thereof, if at all, any reconciliation that the Promoter-Director requires, he has to get it done within two days hereof and report to this Bench by 01.10.2020.

15. Tomorrow this Promoter-Director cannot come before this Bench saying that he could not get the statements-from the said Registries such as Public Information Registiy, ICANN, ICM, etc., therefore he could not pay. It is the look out of the Promoter-Director, who has taken everything upon himself and running the show single headedly without paying money to the Corporate Debtor as well as Registries. It is the bounden duty of him to clear the dues, therefore he shall pay the entire dues charged with a rider, in case any excess payment is made, that shall be refunded to him.