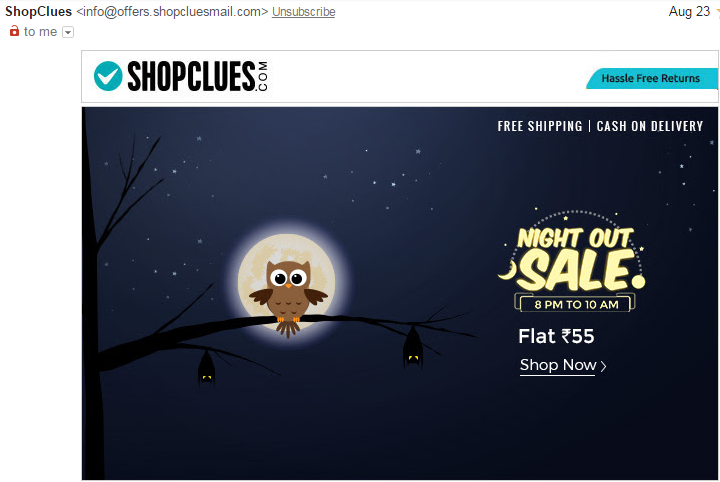 Nice to note that some household items were being offered at Rs 55 only which displayed the original sale prices above Rs 100. So asked my family to select few of them as seemed to be a good offer. We ordered total 6 of them. Though none of them were even worth Rs 55 too, like for one item they even called for choosing a color but still sent a different color… anyway the following was the only item with an external wrap indicating it’s MRP.

Kindly note that it displayed the original price at Rs 129/- and offered the discount of Rs 74 but the package read MRP as Rs 35, please see below:

Now selling over and above the Maximum Retail Price (MRP) as printed on a package in terms of Package Commodity Rules is violation of Consumer Protection Act 1986.

(iv) a trader or service provider, as the case may be, has charged for the goods or for the service mentioned in the com­plaint a price in excess of the price –

(b) displayed on the goods or any package containing such goods ;

(c) displayed on the price list exhibited by him by or under any law for the time being in force;

(d) agreed between the parties;

Though such case are entertained by Consumer Forums / Courts but still these companies do not shy away from charging over and above the MRP price as printed on the package. Following are few of the famous cases in this regard:

A bench of National Consumer Disputes Redressal Commission (NCDRC), presided by Justice J M Malik, dismissed the argument that the complainant had purchased the water bottle outside the multiplex at a lower MRP and filed a frivolous case.

“Keeping in view the facts and circumstances, we affirm the order passed by the fora below and impose further costs in the sum of Rs 5,00,000 on the petitioners (Big Cinemas and Reliance Media-Works Limited) because they must have made illegal enrichment by charging/extorting money from their customers…

“They (cinema hall and owner) have nowhere stated that they have got two MRPs in the case of Aquafina water bottle. They are conspicuously silent about it. The silence on their part is pernicious for the petitioners.
The case against the petitioners stands fully proved,” the NCDRC said.

The New Delhi District Consumer Disputes Redressal Forum imposed “punitive compensation” of Rs 5 lakh each in two separate cases against IRCTC, a subsidiary of Indian Railways, and said being a government corporation, “it is not expected to be deficient in such matters and cannot come down to level of private dealers”.

“We have considered the case in the perspective of unfair and restrictive trade practices, by a government company who supply food articles to millions of rail users, who in transit cannot protest or have little choice but to avail services at whatever cost.

“The IRCTC being a government corporation is not expected to be deficient in such matters and cannot come down to level of private dealers,” a bench presided by C K Chaturvedi said.

The situation has been made clear to the ShopClues.com Customer Care but still they are not interested to look into the matter. Initially the complaint was tried to be lodged within the next 2-3 days of purchase through product feedback option provided at ShopClues.com but no response was ever received. Later, they denied any help stating complaint was to be lodged by the customer within 10 days of purchase !